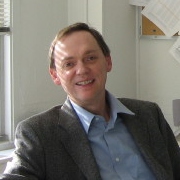 My core personal research focuses on applications of mathematics to biology and ecology. In particular, I am interested in linking animal behavior, population dynamics and evolutionary processes. My goal is to create mathematical models that allow for a better understandig of key mechanisms that preserve biodiversity on Earth. To this end I combine game theoretical methods with differential equations. In particular, I employ separation of time scales by assuming that behavioral processes operate on a much faster time scale when compared to population dynamics. This approach is complementary to the adaptive dynamics approach that assumes population dynamics operate on much faster time scale than evolution of traits. The approach I have developed is based on the assumption that behavioral traits, often described as an evolutionarily stable strategy of a game instantaneously track population densities. This assumption in some cases leads to a feedback map between population densities and trait values that is multi-valued. Substituting this feedback map to population dynamics in such cases results in a differential inclusion, or a multi-valued differential equation. For low dimensional systems, these resulting models are often at least partially analyzable.

Evolutionary games where interaction times are strategy dependent
Classic matrix models of evolutionary game theory assume that all interactions between strategies/phenotypes take the same amount of time. Here we are developing a new methodology to study models where interaction times depend on the two interacting strategies. We apply this theory to some classic evolutionary games. E.g., the classic Hawk-Dove game predicts that when interaction cost between two Hawks is low, the only evolutionarily stable strategy is all Hawks. In other words, when cost of aggressiveness is low, all individulas will be aggressive. However, when Hawk-Hawk interactions take long enough time, when compared with duration of other interactions, aggressiveness evolves even when the cost of fighting is low. For the repeated Prisoner's dilemma, cooperation evolves if individuals opt out against defectors. This means that if a cooperator meets another cooperators, they will stay together as long as possible. However, if a cooperator meets a defector, it will play the game only once and then the pair will disband.

Lac operon as a test of the optimal foraging theory when foragers undergo population dynamics
In Krivan (2006)  I model bacterial growth on a mixture of two sugars. It is well know that in mixed substrates with glucose and lactose bacteria often  utilize glucose first and then switch to lactose (or to some alternate source of energy). At the molecular level this switch is known as the lac operon. In this article I ask: Is this switch evolutionarily optimized? In other words, do bacteria switch between the resources at the time that  maximizes their fitness? To answer this question I build a model of bacterial growth on two substrates. The model assumes adaptive bacterial switching that maximizes bacterial per capita population growth rate - a proxy for bacterial fitness. Using some data from the literature, this model allows me to predict the time at which bacteria should switch. Then I compare this predicted time with observed times of switching for different substrates and different initial sugar concentrations. The observed times of switching show a very good agreement with predicted times. This strongly supports the idea that the molecular mechanism regulating resource switching is evolutionarily optimized.  This is also a  test of an optimal foraging theory  when populations undergo population dynamics. On contrary to the majority of experiments on the optimal foraging theory that do not consider population dynamics of foragers, this model  considers all populations dynamics.

The habitat selection game
The habitat selection game is a game theoretical concept that describes species distribution in22 heterogeneous environments. For a single population, Fretwell and Lucas (1970) defined the Ideal Free Distribution (IFD) in patchy environments, under which animal payoffs in all occupied patches are the same and maximal. Thus, the IFD is a Nash equilibrium of a game that we call the Habitat Selection Game. As any strategy that uses only already occupied patches will get the same fitness at the Nash Equilibrium, it is not clear if the Ideal Free Distribution is stable with respect to mutant invasions. Cressman and Krivan (2006) proved that the IFD is also an Evolutionarily Stable Strategy, i.e., resistant to mutant strategies. The habitat selection game was extended to two and multiple species. The IFD for two competing species in a two-patch environment was derived by Krivan and Sirot (2002). Cressman et al (2004) proved that this two-species IFD is also an Evolutionarily Stable Strategy for two populations. The effects of the IFD on population dynamics of two competing species was studied by Abrams et al. (2007). Evolutionarily stability under population dynamics were considered for multiple populations by Krivan and Cressman (2009) and for a single population by Cressman and Krivan (2010). Many results on habitat selection game for competing species or predator-prey interactions were reviewed in Krivan et al. (2008).

The Optimal foraging game
Optimal foraging theory (MacArthur and Pianka, 1966; Charnov, 1976; Stephens and Krebs, 1986) assumes that organisms forage in such a way as to maximize their fitness measured as energy intake rate. These models assume a homogeneous environment with several resource types that a consumer encounters sequentially, and predict the optimal consumer diet. This line of research led to the prey model (also called the ''diet choice''; Charnov, 1976). The basic assumption here is that individuals do not compete for food. The classical example of such a situation is the experiment with great tits where a single animal feeds on two food types delivered on a conveyor belt (Krebs et al., 1977; Berec et al., 2003) which assures that prey are not depleted by predation. Certainly, this is a very unrealistic assumption, and I am interested to understand how predictions of the optimal foraging theory are shaped when population dynamics of resources and/or consumers are considered (Krivan, 1996; Krivan and Sikder, 1999; Krivan and Eisner, 2003).  The game theoretical approach to optimal foraging is presented in Cressman et al. (2014).

The Lotka-Volterra predator-prey model with foraging predation risk trade-offs
The Lotka-Volterra predator-prey model is one of the earliest and, perhaps, the best known example used to explain why predators can indefinitely coexist with their prey. The population cycles resulting from this model are well known. In this article I show how adaptive behavior of prey and predators can destroy these cycles and stabilize population dynamics at an equilibrium. The classical predator-prey model assumes that interaction strength between prey and predators is fixed, which means that coefficients describing interactions between prey and predators do not change in time. However, there is increasing evidence that individuals adjust their activity levels in response to predation risk and availability of resources. For example, a high predation risk due to large predator numbers leads to prey behaviors that make them less vulnerable. They can either move to a refuge or become vigilant. However, such avoidance behaviors usually also decrease animal opportunities to forage which leads to foraging-predation risk trade-off. The present article shows that such a trade-off can have a strong bearing on population dynamics. In fact, while the classical Lotka-Volterra model has isoclines that are straight lines, the foraging-predation risk trade-off leads to prey (predator) isoclines with vertical (horizontal) segments. Rosenzweig and MacArthur in their seminal work on graphical stability analysis of predator-prey models showed that such isoclines have stabilizing effect on population dynamics because they limit maximum possible fluctuations in prey and predator populations. The present article shows that not only population fluctuations are limited, but they can even be completely eliminated.

Krivan, V., Pryiadarshi, A. 2015. L-shaped prey isocline in the Gause predator-prey experiments with a prey refuge. Journal of theoretical biology 370:21-26